Update: Installation of “Entwined” is expected to begin on December 1st with the public opening now on December 10th.

The art installation will begin on December 1st and will be open to the public from Dec. 10 through Feb. 28 with a possible extension to June 1. The lighting each night will take place from sundown to approximately 10pm. The project is paid for through private donations to the Park Alliance’s Golden Gate Park 150 campaign and does not use city funds. Peacock Meadow sits in the park’s east end between McLaren Lodge and the Conservatory of Flowers and across from the new pop-up Welcome Center on JFK Drive. 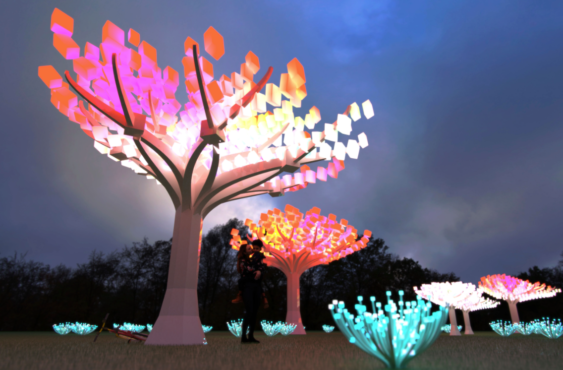 The Entwined installation creates a whimsical wonderland where visitors can explore paths and sit under a grove of three entwined sculptural trees while practicing social distancing. The trees range from 12 to 20 feet tall with illuminated canopies as large as 30 feet, filling the meadow with changing light. Sculptures comprised of 2,000 LED lights cluster into small flowering bushes at varying heights, further filling the green space with peaks and valleys of radiating light.

The variety of lighting effects are inspired by nature and build a sense of awe: Raindrops on the pavement, lighting and thunderstorms, wind blowing tall grass and flowers, and ripples on a pond.

“As the days get darker, this dazzling installation will light the way for park lovers to experience Golden Gate Park in a new and creative way as we close out its 150th Anniversary,” said San Francisco Recreation and Park General Manager Phil Ginsburg. “A twilight stroll through the park’s east will be truly magical this winter. People can visit the City’s official holiday tree in front of McLaren Lodge before exploring Entwined, marveling at the Conservatory’s annual light show, and enjoying the 150-foot Observation Wheel and illuminated bandshell in the Music Concourse.”

Entwined is a new concept designed for Golden Gate Park, although parts have been installed previously including at Electric Daisy Carnival Vegas and Canada’s Toronto Light Festival. The public art project is ADA accessible.

“We can’t wait to bring this amazing public art experience to Golden Gate Park for the 150th Anniversary and bring some joy to the end of this year. Entwined will offer park visitors a vibrant, fun, and socially-distanced way to celebrate the holiday season,” said Parks Alliance CEO Drew Becher.

The installation, the final activation of Golden Gate Park’s yearlong anniversary celebration, reflects a park steeped in arts and creativity, science and technology, history and culture. For over 30 years, Gadeken’s award-winning artwork has been exhibited throughout the Bay Area and internationally.

“Entwined is an immersive light experience for Golden Gate Park visitors to explore, engage with, and enjoy. What does the ‘tree of life’ look like in the world, post-nature? The installation is my latest exploration of this question, blending timeless natural objects with abstract forms and modern technology to evoke wonder, magic, and joy.” Gadeken, said.

Disclaimer: Please double check event information with the event organizer as events can be canceled, details can change after they are added to our calendar, and errors do occur.

Other Events on This Day