San Francisco is Now the Most Gentrified City in the U.S.

Most recent data (as of 2017) show SF, Oakland, San Jose and Sacramento all in top 10 most gentrified cities
By Johnny Funcheap - posted 7/6/2020 No Comment
NCRC

Thanks to USA Today for letting us know that in a recent survey, San Francisco-Oakland was named the most intensely gentrified city in the U.S.

According to the most up-to-date study from 2020 by the National Community Reinvestment Coalition that San Francisco was the most intensely gentrified city in America from 2013 to 2017, followed by Denver, Boston, Miami and New Orleans. They had the largest share of their vulnerable neighborhoods that gentrified during that time period.

In the previous study dating back to 2013, San Francisco was 12th with Washington D.C. was first.

While gentrification increases the value of properties in areas that suffered from prolonged disinvestment,it also results in rising rents, home and property values. As these rising costs reduce the supply of affordable housing, existing residents, who are often black or Hispanic, are displaced. This prevents them from benefiting from the economic growth and greater availability of services that come with increased investment.

Highlights of the Study 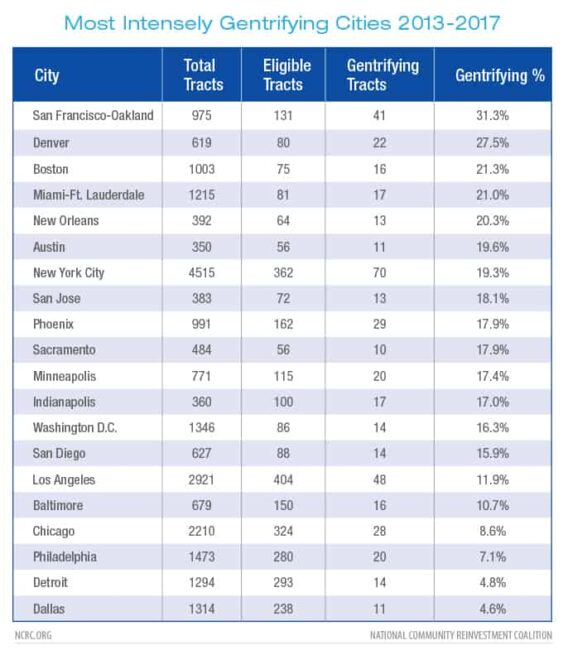 Most U.S. cities and towns were struggling. Their problem was stagnation and disinvestment, not gentrification or displacement. More in our new study: https://t.co/OrBMh7dawf pic.twitter.com/o0ZdvjlzMr